RRoads - About Us - Inner Banner

RRoads - About Us - Left Menu

RRoads - About Us - Our Chairman

Home - About Us - Our Chairman 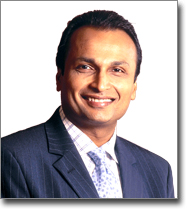 Graduated (B.Sc. in Science) from K.C. College, Mumbai University and MBA at Wharton, University of Pennsylvania.

Anil Dhirubhai Ambani is one of India's leading business leaders and founder of the Reliance Group; whose constituent business enterprises are engaged in pivotal roles in the ongoing economic transformation of India.

Anil or ADA, as he is often referred to by his colleagues, founded the Reliance Group in 2006 and in less than 10 years, the Reliance Group has built a leadership position in major growth sectors of the Indian economy, including telecommunications, generation, transmission and distribution of renewable and non-renewable sources of power, national road highways, metro rail systems, cement, financial services, education, healthcare, media and entertainment.